Every cigar cutter we sell at Chesapeake Pipe & Cigar is personally selected by us to deliver the best cut possible for your cigar. While it might not be our favorite method of cutting, each cutter we sell has been tested and approved. If we wouldn’t personally use a cutter we sell, we won’t sell it!

The process of cutting a cigar is simple, yet, highly personal. Some choose to bite or pinch off the cap, forgoing the use of a cutter entirely. The use of a tool to open up the head of the cigar seems more civilized than biting it off and spitting the tobacco on the ground. Most Americans prefer to use a cutting tool to open the head of their cigar and allow the smoke to flow.

That said, there is only one rule to cutting a cigar — don’t compromise the cap structure of the cigar. If you destroy the cap, you leave yourself open to fraying tobacco sticking to your lips and tongue. While that’s not going to ruin the flavor of your cigar, it’s just plain annoying nonetheless.

For those that choose a tool, there are several options available, but all have the same basic requirement — the tool must do the job well.

The guillotine style is broken into two categories — Single Blade and Double Blade. 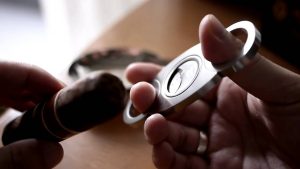 The biggest drawback of the guillotine cutter is that it is easy to cut too much off the head of the cigar. Removing more than just the very top of the cap structure leaves the head of your cigar open to fraying in your mouth.

The backplated guillotine solves the problem of cutting too much off the cigar. The cigar rests against the plate covering one side of the cutter while the open blades on the opposite side just shave the very top off the head of the cigar. These cutters aren’t made to cut torpedo style cigars, although you can simply cut the torpedo a couple of times to overcome the limiting plate’s effect.

Like a standard set of scissors, these cutters feature two blades that come together at a central pivot point, although some scissor style cutters feature a single blade and look more like a pocket knife than scissors. 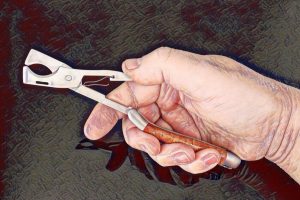 If you look at the construction, you’ll see that the iconic XIKAR Xi “Teardrop” cutter is actually a dual blade scissor style cutter. A more elegant, yet standard scissor design might be the hand forged Laguiole cutter. The scissors fold out like a pocket knife blade. 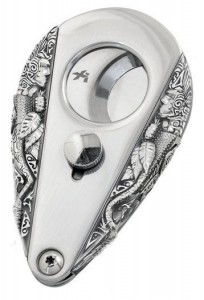 When shopping for a scissor style cutter, check to see how well the blades are put together. If they shake or rattle, they may not give you the clean cut you’re expecting.

V-CUT AKA CAT’S EYE AKA SLOT 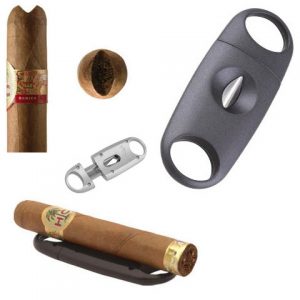 V-Cutters are equipped with a single “V” shaped blade. They remove a notch from the head of the cigar, taking both part of the cap, binder and filler tobaccos with it. This type of cut is very popular in certain geographic areas such as Long Island, NY.

The cigar punch is a round blade that removes a circular section of cap from the head of the cigar. If done properly, the cap structure is maintained and fraying tobacco is less likely to end up on our tongue. Again, like the backplate cutter, the torpedo style cigar head can not be opened with a punch unless you work at it a bit.

There are any number of items you can use to poke a hole in the head of a cigar. The sharp tip of a pocket or paring knife, a golf tee, nails, toothpicks and such. Remember, the whole reason we cut the head of the cigar is to establish proper airflow when puffing. As long as it doesn’t leave some sort of foreign matter or destroy the cap structure, use whatever you have available to get the job done.

You can simply cut slits in the head of the cigar to open up the air flow. There is a Japanese style cutter named Shuriken that is designed to formally slit a star shaped pattern in the cigar head. Razor blades or a sharp pocket knife can do the job as well.

While opening the head of the cigar up with a tool seems to be pretty standard here in the US, pinching the cap off between two fingernails or biting the cap off with your teeth is actually very standard in most of the cigar making countries in Central and South America. If you choose to go this route, respect the cap structure and pinch off just the very top layer. As for biting, if you have to tug hard to help the opening along, you’re probably biting off too much.