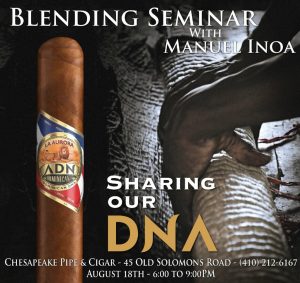 La Aurora’s Master Blender, Manuel Inoa will be joining us here at Chesapeake Pipe & Cigar, Friday, August 18, 2017 from 6 PM till 9 PM. During his brief time with us, Manuel will be introducing us to his new signature ADN Dominicano Blending Seminar.

ADN (which is DNA in Spanish,) Dominicano begins with tobacco fermented in an extremely rare Dominican process called Andullo.

Rather than hanging tobacco leaves in barns to age and dry, the tobacco is placed into long cylindrical pods known as Yaguas. They are then stacked on top of one another and rotated while the tobacco processes. Andullo tobacco is commonly found in pipe tobacco (including Lane’s NEW Andullo,) but is generally a rarity in cigars.

According to Lane Limited’s Joyce Beck, Andullo tobacco is very difficult to work with as the fermenting and aging process creates a very dense and tough to cut final product. It’s a testament to La Aurora’s expert cigar rolling capabilities that they are able to successfully integrate Andullo in their newest cigar.

This Seminar and ADN Dominicano Blending Kit cost $45 and we’re limited to just 20 attendees. Call, email or visit the shop to reserve you spot.