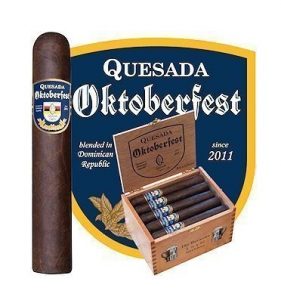 Category 5 Hurricanes, Earthquakes, Crazy North Koreans and a American political environment that is on the edge of the abyss. The world we live in every day seems like a surreal dream / nightmare that’s getting more and more chaotic, Germany’s 145 year old Oktoberfest is a welcomed annual fifteen day party celebrating beer, food and fun!

Oktoberfest is one of the most famous festivals in the world. The yearly celebration attracts millions of people to Munich to partake in the festival, with millions more enjoying the famous beer produced for it around the world. Traditionally, there is a cigar tent for aficionados to enjoy a smoke with their beer. The Quesada family has blended a cigar specifically to be paired with the flavorful Märzen-style beer produced for Oktoberfest. Blended with a variety of flavorful Dominican tobaccos, the Quesada Oktoberfest is available in very limited quantities. Enjoy them with your favorite Oktoberfest beer. Only released during the months close to October.

This hearty Dominican puro all begins with a Dominican Cibao wrapper that is thick, dark and oily. This beautiful leaf hugs an all-Dominican recipe of long-filler criollos, visos, and ligeros, producing a hearty medium to full-bodied cigar chock full of flavor and complexity. From the first puff, you’ll know why the Oktoberfest is so special. Pleasant notes of cedar, earth, and dark chocolate mingle throughout a cool slow burn.

This year, I’m suggesting you try a lesser known Bavarian Märzen, Ayinger Oktober Fest-Märzen. This German import was reviewed by The Capital’s Liz Murphy in late August and she waxed so poetic about it that I just had to try it out.

According to Murphy, “Hailed by many as one of the best representations of the (Märzen) style, it balances the sweetness of the malt and its dry finish with a well-rounded, smooth body.”

In 2016, for those that like their beer on the dark-side, Quesada released two sizes of a Nicaraguan puro blended to pair with Bock-style beers.

The “Triple Bock” blend is a medium to full-bodied cigar that features loads of dense smoke with a tasty profile of chocolate, earth, and cedar.

While Quesada’s Oktoberfest cigars are blended to pair with the seasonal beers of fall, they are natural go-to’s with all beers of similar body and flavor profiles all year long!

In honor of my Grandfather, Ludwig Lohsl and my Great Grandfathers Anton Beck and Michael Greiner, I spotlight these great cigars each year. In the early 20th century, German immigrant, Anton Beck, was a Brewmaster for three breweries in Altoona, PA up until Prohibition. Even after commercial beer sales were outlawed, Anton continued to be the Brewmaster for the Concordia Club as well as brewing beer for his family and friends.

Ludwig and Michael were known to enjoy a few German beers from time to time as well.